Thanks Universe for Stealing My Bike 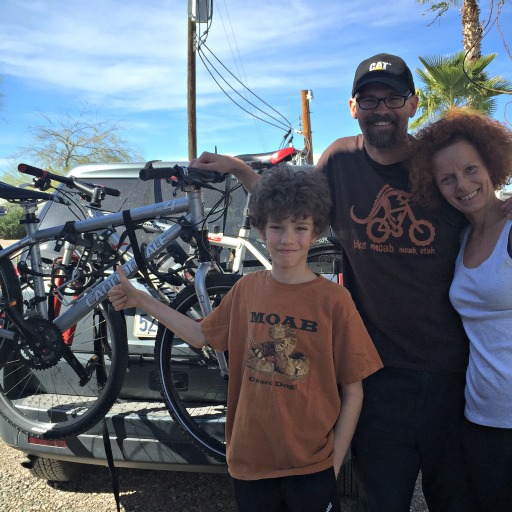 We had just settled in Tucson, Arizona, when a tall, lean man approached our rig and said with a Swiss accent, “This probably seems like a weird question, but did you get that bike in Moab, Utah?” In fact, yes we did get it in Moab. “I think that’s my bike!” he exclaimed. Wait. What? Rewind.

If you’ve been following More Than A Wheelin’ on Facebook, then you may recall that my bike was stolen in Eugene, Oregeon, right off the back of my car. Someone had cut through the lock and left a sad, lonely tire hanging. I was heartbroken; I loved that bike. I couldn’t bring myself to replace it for a while, but then in Moab we found ourselves in a bike store, mainly because they sold coffee. We got to talking with the manager who was clearing out his summer rental inventory, and since I had a coffee to finish I had to look…y’know for fun. Of course he had a great bike, in good condition, which was the right size and price. Score—a new-used bike!

Fast forward to Tucson and the Swiss guy. He had seen us drive into the RV park with the bike on the back of the car. He decided to check if it happened to be his old bike. He told us that about a month before we arrived in Moab, he had traded in that bike to that same shop. He got a good trade in value (more than he paid) and by the time I bought it, I paid much less than the bike shop owner purchased it for. We speculated that the owner made decent money off the rental, so in our minds, everybody won. Marc (we finally did introductions) pulled out his phone to show us pictures of the bike. If that weren’t enough proof, he called over his family, and his plucky ten-year old son Aaron, verified the bike. He said “Oh look it has all the same scratches (insert adorable Swiss-Hungarian accent)!” Marc’s wife Marianna regaled us with stories about the bike, and by the end we all felt connected by this serendipitous experience. Seriously what are the odds? We weren’t even supposed to go to that park but changed our plans last minute. Marc, Marianna and Aaron are also full-time RVers. They traveled from Europe to Canada, bought their truck and RV there, and are traveling through North America for one year. They’re a really fun and interesting family and we are so happy to have met them.