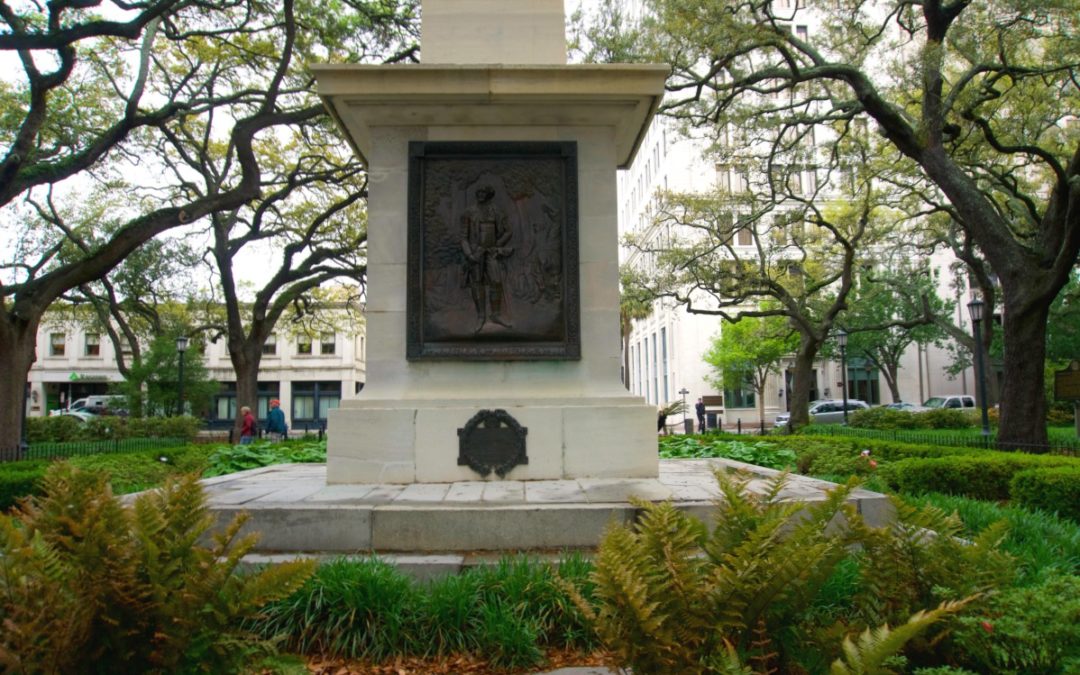 My husband, Bryce, and I love to explore the history, culture, and food in the places we visit. When we found ourselves with only one day in Savannah, Georgia, a food and history tour seemed like our best chance of seeing and tasting all that Savannah had to offer.

It was also Bryce’s birthday, and I was looking for a unique gift. When you live in an RV, buying and accumulating things loses its appeal, so I researched and found the perfect food tour!

This post is not sponsored and I’m not promoting Viator, the tour operator. This is an unbiased report of the tour and what you can expect if you sign up.

I initially tried to sign up for the Savannah Culinary and Cultural Walking Tour for $53.95 since it’s a “Top Insiders Pick” but it wasn’t available. The company talked me into the Savannah Historic And Secret East Side Food Tour because it was their original tour, and was also highly rated. It cost $59.95 per person, but I decided it was probably worth the extra $7.00.

The tour included a very knowledgeable tour guide who regaled us with stories as we munched our way through town. 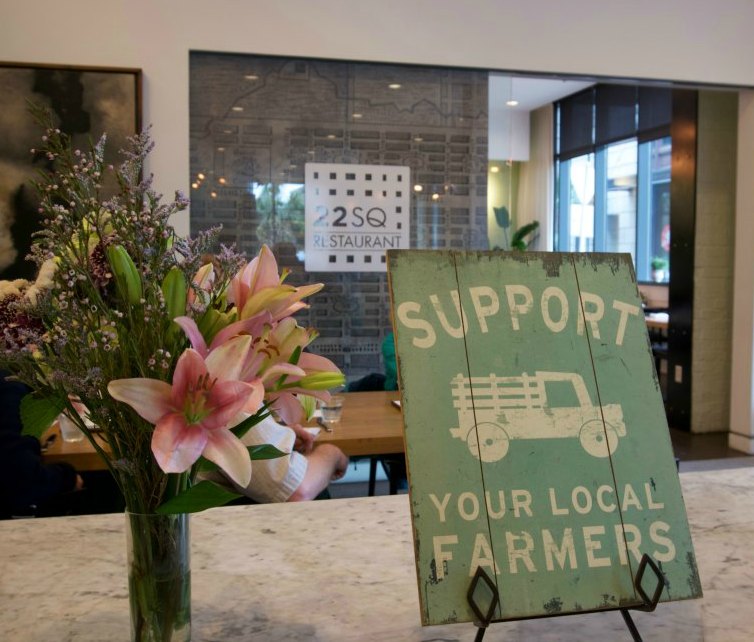 We met the tour group inside the Andaz hotel. The tour started there, which seemed weird at first, but actually turned out to be a nice starting point.

The restaurant 22 Square claims to be “One of the Best Savannah, GA, Restaurants For Seasonal & Local Cuisine” where you can taste the flavors of the Georgia Coast.

22 Square also says it’s part of the new culture of Savannah; that their chefs use “organic and seasonal produce, fish, and meats from local markets and farms to energize our neighborhood.”

The food was quite tasty. We had southern fried green tomatoes, with a twist—a slightly spicy remoulade sauce, and tender, wilted greens. It was the right combination of crunchy, savory, and spicy to rev up our taste buds. We complemented our meal with a bloody mary, which set the mood for the rest of the tour. 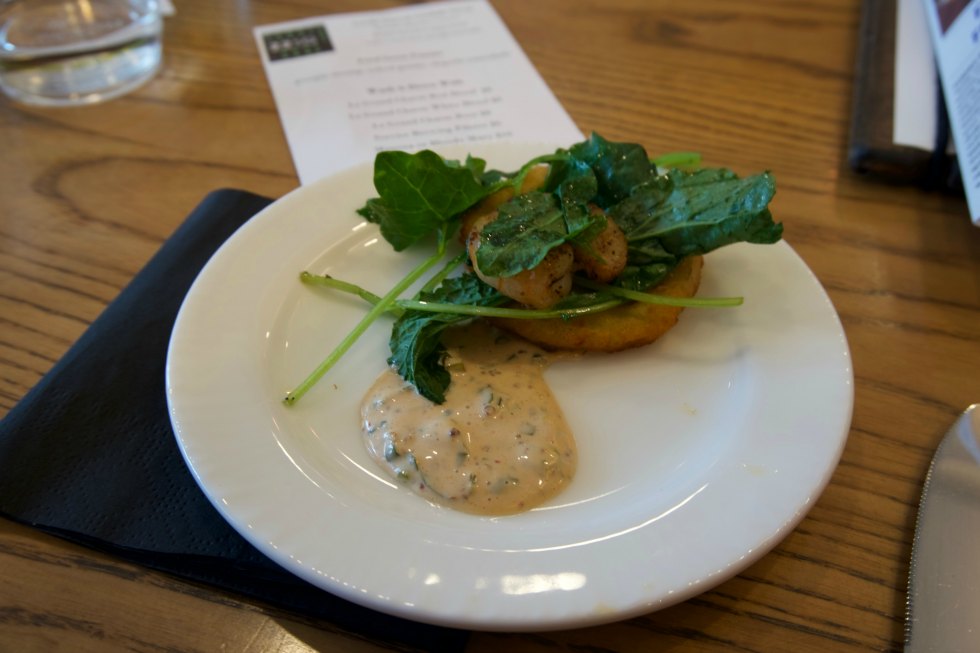 22 Square is named after the 22 historic squares in Savannah. The city was designed in a grid pattern and originally had 24 squares, but two were lost as the city developed.

We enjoyed this stop for the food, but not for the atmosphere, as it was inside a hotel lobby.

Public consumption of alcohol is allowed in certain parts of the city, and we joyfully sipped our bloody marys as we ventured to Tondee’s Tavern. This is a locally-owned restaurant and bar housed in a former 1850’s bank building at 7 E. Bay Street.  It has much historical relevance as a popular tavern between 1770 and 1785. According to lore, in 1774 the Sons of Liberty met here to plan Georgia’s opposition to British colonization.

As we ate our Bobby Flay style Shrimp and Grits (with bacon and a white wine reduction) our tour guide explained more history. 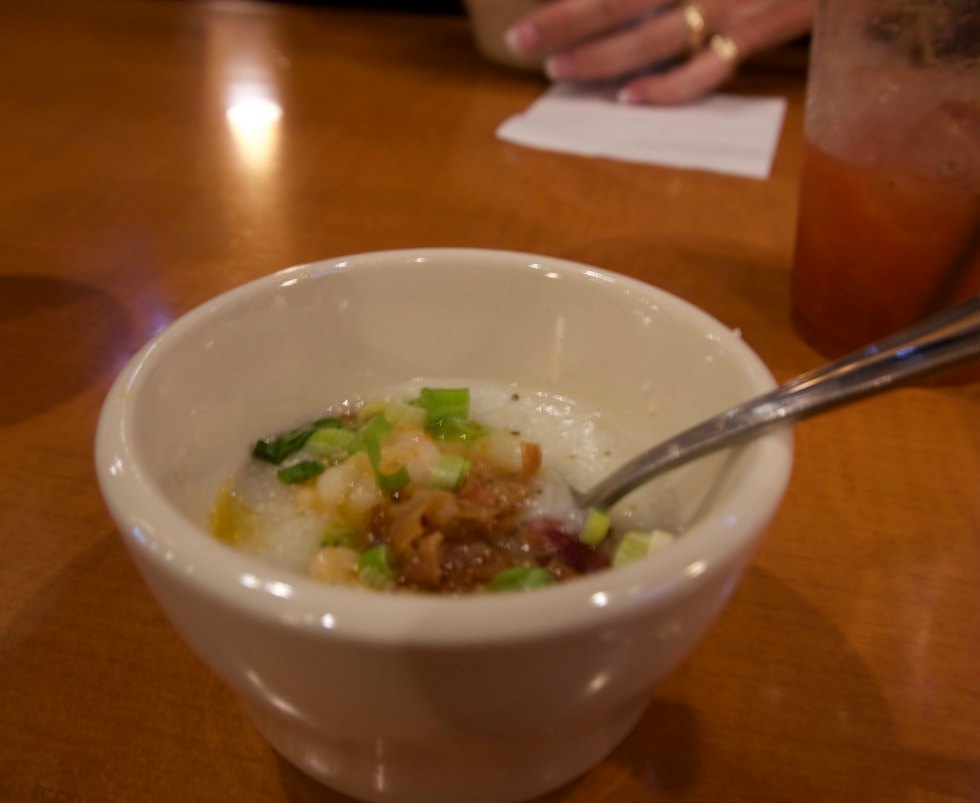 I tried to write some notes in my iPhone. Here’s what they said:

Disagree on the battle strategy 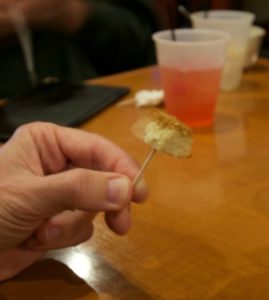 I apologize if you’re a history buff—I’m going to blame this on the bloody mary. Or maybe I was distracted by this cheesecake bite provided for dessert.

I tried to verify the history online but just couldn’t find enough information to weave together a coherent tale. If you know what the heck any of this means, please educate me in the comments.

Our third stop was at The Ordinary Pub, a basement-level restaurant. The emphasis here was less about local history and more about the food, “Pairing classic favorites with modern twists, our menu features creations inspired by California, the Mid-West, and, of course, our home here in the Low Country.” Wow, I traveled all the way from California…to eat California-inspired food. 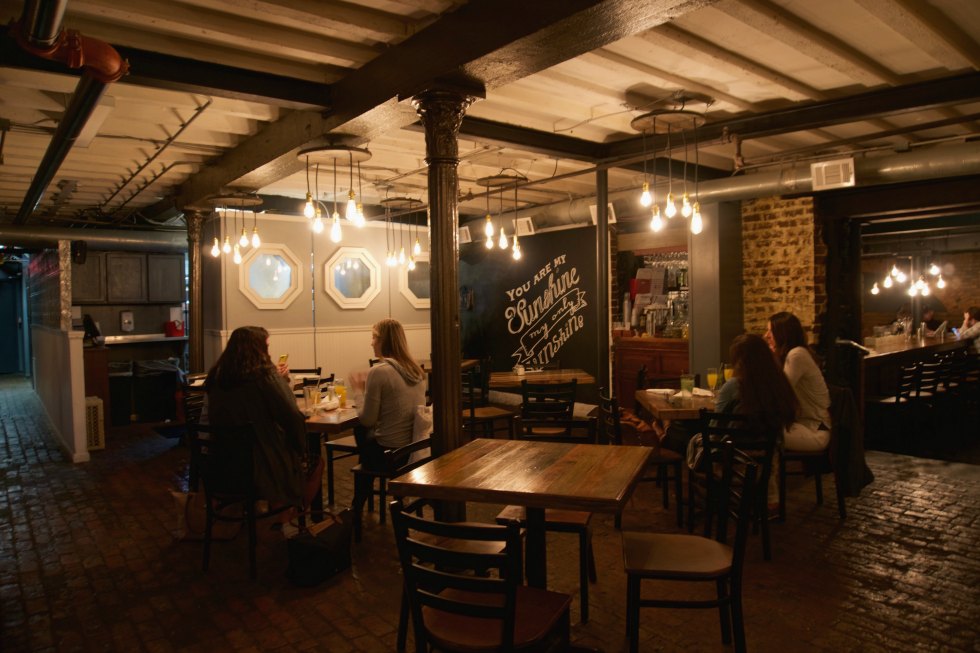 The Ordinary Pub is a little dark and odd. It’s an interesting atmosphere, but not one that I enjoyed at 11:30 AM. This is a place that is better suited for a happy hour or an evening nightcap.

Of all the stops, the food here was the best! Their signature dish—Pork Belly Doughnut Sliders—is a winner. It had the right mix of sweet and savory…oh and fat! Anything with fat pretty much wins the game for me, and they knocked it out of the park.

If sweet and salty fat doesn’t do it for you, then the fried banana bread pudding bite was a home run. It had that perfect ‘crispy on the outside, chewy on the inside’ consistency. I loved every tiny bite!

I was full by the time we arrived at Molly MacPherson’s Scottish Pub. But being full isn’t exactly a condition for me to stop eating #Inevermissameal. So when they brought out the 400-year-old family Cottage Pie recipe, I was all over it. Literally, all over it with a spoon and any other utensil that would help facilitate getting hot, gooey meat into my mouth. 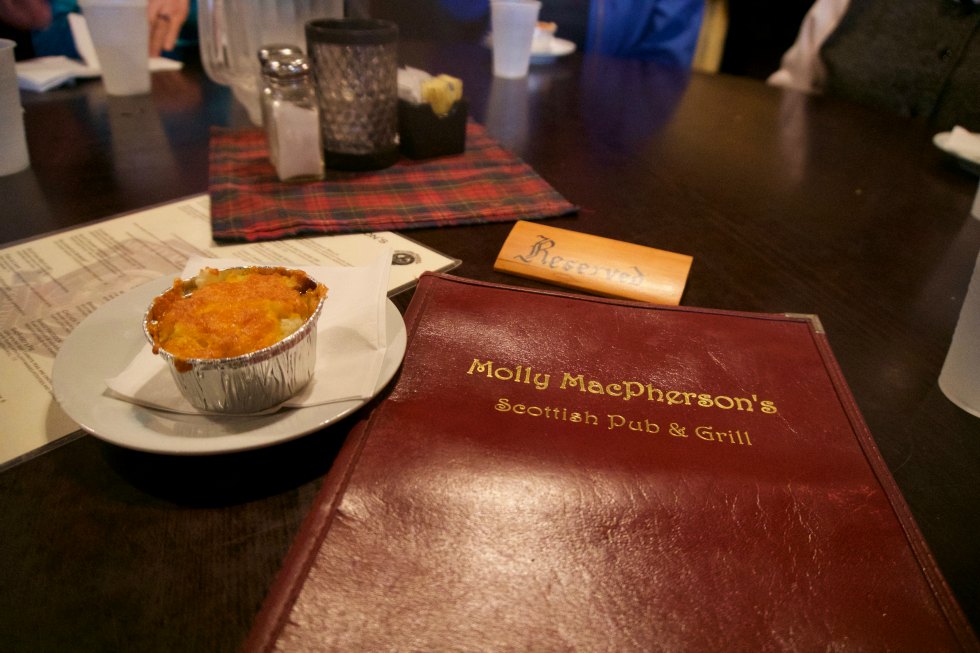 But then I really HAD to stop eating. I was too full, and I wanted to ensure I could eat the food at the next place. When you pay for a food tour, you only get your value when you eat all the food. You get me on this, right? So I left exactly two bites on my plate that Bryce promptly gobbled up.

I had sobered up from the bloody mary by this point (I’m a lightweight by the way), but was starting to sink into a food stupor. What I do recall about Molly MacPherson’s is a lot of Scottish decor, a ton of malt liquor on display, and a man in a kilt. I always get excited when I see in a man in a kilt because it’s just so rare in my hometown of Orange County, California.

By the time we got to Pie Society, a traditional British bakery, I was almost wishing this food tour would end. Almost because I didn’t want to miss out on the next treat—a buttery, flaky sausage roll! Usually, items like butter and sausage together in a dough blanket are just my style, but I didn’t know if could digest this dough bomb. So I took one bite, and put it down. 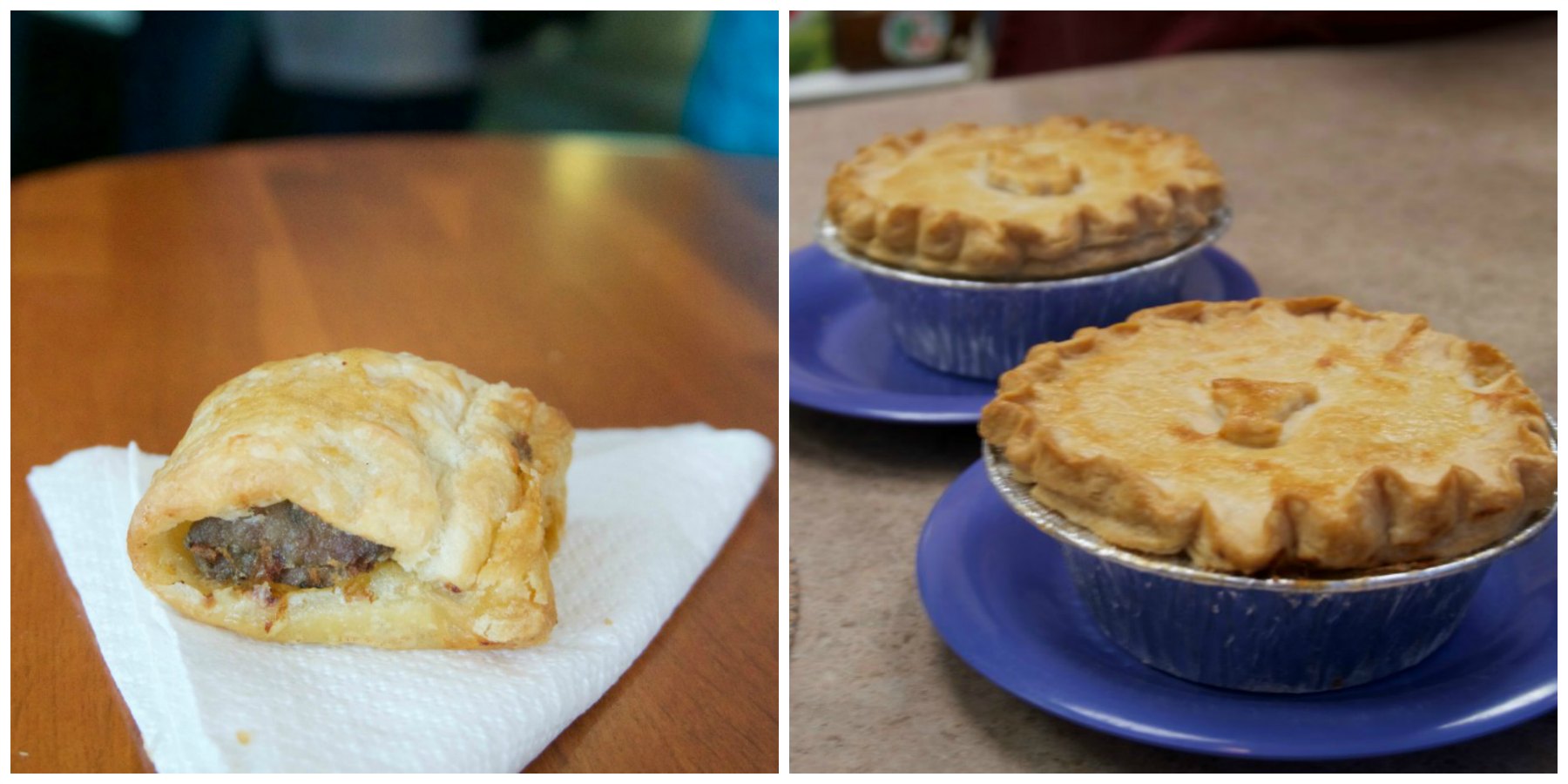 Let me stop right here and tell you that this NEVER happens. I don’t ever really take one bite of anything and put it down—unless it’s a 4 oz. bite of steak that I put down before my second 4 oz. bite of steak. Are you picking up what I’m putting down here? Eating is my thing and taking one bite of something is a form of torture. But another form of torture is being too full, and we had yet another stop on this tour.

I would return here if I wanted a savory or sweet pastry treat to go.  But prior dishes of pork on a doughnut and a beef pot pie kind of overshadowed the sausage roll.

Our last stop was the Savannah Bee Company, and I wasn’t too excited about it. It’s not that I don’t like honey—I like it a lot actually (so much so that two days prior we had been to the same establishment in Charleston, South Carolina). 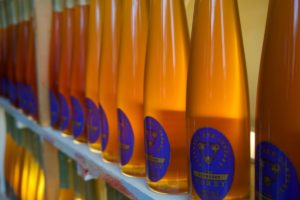 They had many different types of honey to sample with little disposable spoons. I found this one jar of lemon honey that was to die for. I’m not kidding, I pretty much sugar crashed after about 20 little spoonfuls.

But I was pleasantly surprised with this tour stop. It wasn’t just honey tastings, we received a mini-tour from one of the employees. She provided samples and educated us on the origin and flower type of each honey.

The best part was when the owner, Ted Dennard, made an appearance and personally provided us a tasting of his finest honey—Tupelo Honey Gold Reserve—while sharing his story of starting the Savannah Bee Company. 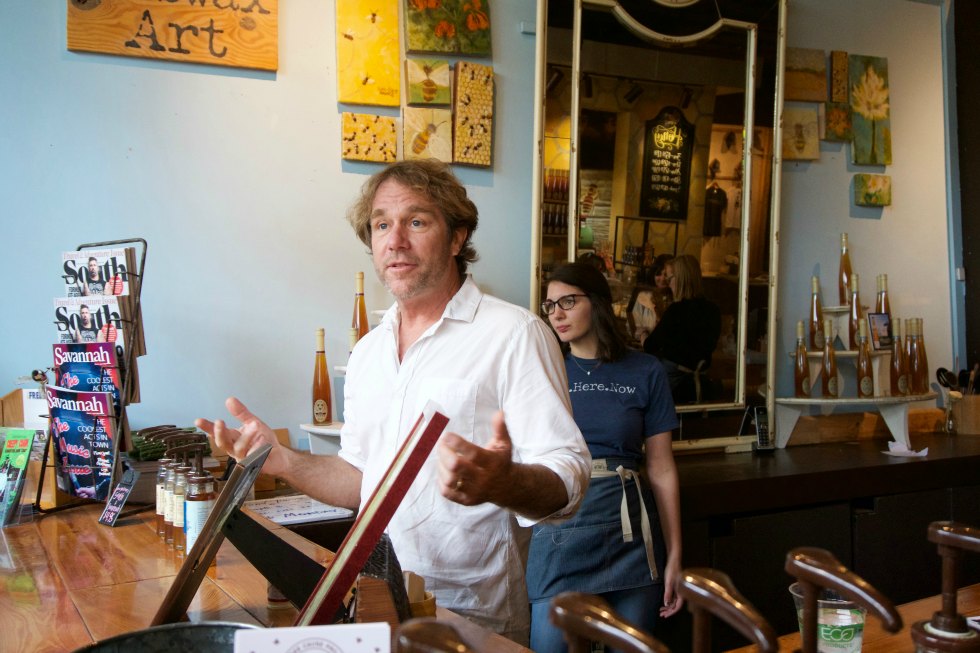 He never pictured himself as an entrepreneur, working odd jobs as a youngster until eventually working on a bee farm. He caught the buzz (aren’t I clever?), and eventually pursued a career as a beekeeper. In 2002, he produced his first price sheet in Atlanta to sell his honey, and today he has 10 stores in 6 states, employs 160 people, and has a 40,000 square foot warehouse for honey production. Truly buzzworthy!

Additionally, his company promotes goodwill through the Save The Bees campaign to educate kids and adults about how to protect bees. His Bee Cause Project has installed 350 hives in 50 states and 4 countries.

This stop wasn’t just about the honey, it was about the ecosystem of bees, the environment, and how we all play a part in the health of the planet. Yeah, I got all of that from one delicious spoonful of honey…okay maybe more like 20 spoonfuls.

Overall, we really enjoyed the food and history tour. It was fairly priced, and a great way to experience some local fare and local lore. A bit more diversity in the food options would help round out the tour as some of the dishes were heavy, and I got full quickly. Not everyone would have that experience, Bryce didn’t, but it would have been nice to mix it up and not have pork, beef, and sausage back to back. But it’s a tour worth checking out if food and history is your thing. Click to see the Savannah Historic And Secret East Side Food Tour details.

Are you looking for more vacation and tour ideas? Check out more More Than A Wheelin’ Travel articles here.