We Lost Our Cat And Found The Kindness Of Strangers 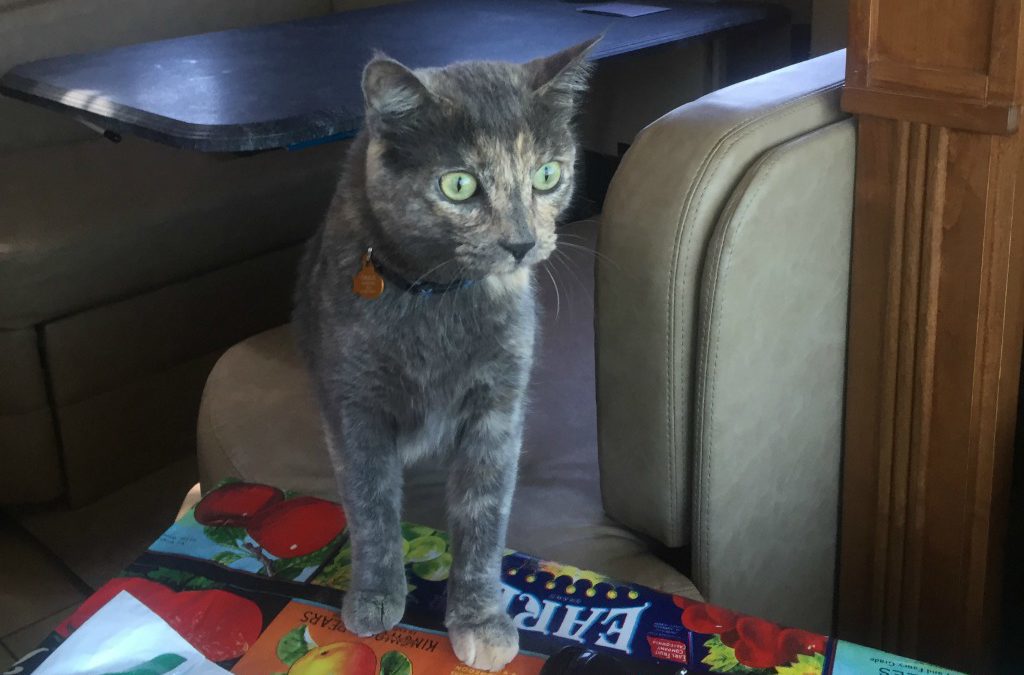 We are heartbroken and filled with all-consuming grief.

It was a dark Saturday night at Thousand Trails RV park near San Antonio, Texas. Bryce was putting new liners in the cat waste box, when without warning, our cat Bianca pushed her way through the screen door window. It always had to be completely shut because she knew how to open it with her paws. But she had grown smarter and more aggressive in recent days, so her breakout was inevitable at some point. She vanished into the pitch black night, and all we have left of her is her collar.

Thousand Trails is a particularly wild park, and the call of the wild was strong for Bianca. Hundreds of deer, wild turkeys, massive jack rabbits, squirrels, and birds roam freely. You can’t take more than about thirty steps without running into a deer or ten. And there are trees everywhere enveloping the RV sites. The cats loved it! We let them out in the daytime only for short periods and always supervised. They liked to smell the flowers, eat the grass, roll in the dirt and chase butterflies. Generally, they’d stay close and came home when called, except Bianca was straying further and becoming defiant when we wanted her to come in. She’d hide in the wheelwell of the coach, and hiss at you if you tried to get her before she was ready. Still, she’d always come back when hungry or in need of chin scratches

We made a fatal error in judgment. It’s our fault she got out and never came home. At least that’s the guilt part of grief talking. Bryce said he shouldn’t have left that little window cracked. I said I should have looked harder at night. But, I too have left that window open, and we both searched as best we could in the dark. But Bianca was going to do what she wanted, when she wanted—that’s her style. The real mistake we made however, was being naive about the risks. We knew coyotes were in the area, but didn’t think they’d come into camp. We assumed that since she was a smart cat, Bianca would know to hide under the coach, and meow when she was ready to come in. We agreed to look for her when either of us got up during the night, so reluctantly we went to bed.

I was dreaming about driving with a stranger in a fast, out of control car. Bianca appeared in the middle of the dream and meowed me out of panic. I awoke and swore she was meowing outside. Convinced she was on the steps waiting to get in, I got up and opened the front door…but no cat. I hurriedly went outside half asleep, barefoot on the rocks calling for her…but no cat. I went back to bed feeling very unsettled. Bryce got up about twenty minutes later and did the same thing. It was a fitful sleep for the remainder of the night. The morning came and still no Bianca. Bryce got up with the break of light to look for her, and when I realized she wasn’t home I joined him. I found her collar about twenty minutes later.

Then, we thought we found her!

We searched like we had lost a child. We don’t have children so Bianca and Parker fill that void. Some people might think, “Really, a cat?” Yeah, really, a cat. We have strong bonds with them as many pet owners understand. They have unique personalities, traits, and behaviors. Bianca (also known as Beebs, Beebinator, Lady and Monkey) likes to interact with us at night. She gets her pets from Bryce first, causing her to purr ecstatically, and then curls up in my nook to sleep. Parker (also known Parkeramos, Love bug, and Bud) comes in closer to morning, pawing at my face to wake me. Bianca rarely meows and when she does it’s a tiny, sweet, high-pitched “maw” sound. Parker “meooows” all day, really more like bellows for food, attention, and just to chat.  Parker is a clingy lap cat. Bianca thinks he’s a freak. Generally speaking Bianca is no fan of Parker, but Parker is a pathetic, loyally obsessed fan of Bianca, even to his own paw-whipped demise. Despite the fur-enemies status, he’s still visibly upset by her absence and continues toawait her return.

We searched for forty collective hours during hot and humid days: in the woods, by the cabins, by the lake, under other people’s coaches, in the trees, in the woods, by the cabins, by the lake, under people’s coaches, in the trees…you get the picture. We looped the campground and surrounding areas so many times that the wild, jungly park seemed smaller and smaller with each pass. Snap, pop, crunch, chirp, “Biaaanca. Biaaanca.” It was like a walking meditation; slow gentle footsteps through the woods, calling her name over and over, looking and listening for her faint “maw” response. I never breathed so slowly and deliberately for so long, or saw that many animals, or heard more sounds of the wild in my life.

Then a miracle happened. Bryce spotted her under a cabin–a gray, shadowy cat that ran from him when he called. That didn’t make sense though, why would she run if she was lost? Unless she didn’t want to be found. I was relieved however that at least she was spotted, and it was only a matter of time before she came home. Only later when we coaxed her out with her favorite turkey deli meat, it wasn’t her, it was her doppelganger! Really, another cat that looks just like Bianca, an unusually colored, muted tortoise-shell cat hiding where she would be hiding? It was a trick of the gods.  That doppelganger befriended us, or more likely the turkey meat, and came around for petting and socializing. Dang if that cat wasn’t cute, but she wasn’t Bianca (pictured right). It was another blow. 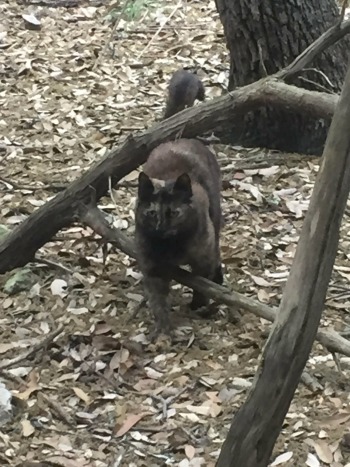 We Found the Kindness of Strangers

The searching continued and the sadness got heavier, except the one thing that warmed my heart was the compassion offered by the other park goers. We had put signs up of Bianca everywhere, and slowly people started to help us. People who were on vacation with their families, enjoying their time at the lake, barbequing and relaxing. One-by-one they would come over to report a Bianca sighting with as much desperation to find her as us.

“I saw her over by the cabin.”

“I tried to catch her but she ran.”

“I had her in my arms, but she scratched me and got away. I’m so sorry.”

People on bikes, walking their dogs, coming through the woods to our site, our neighbor who sat and chatted with me to comfort me while I cried. It was an amazing show of empathy and support, and it meant so much to have people keep a lookout and give us updates.

Our theories about Bianca’s disappearance range from she got lost, trapped, a coyote got her, or she does’t want to come home. Bryce thought of “The Great Horned Owl” theory. We found her breakaway collar only fifty paces from our coach, in an open area of the campground. An owl could have been stalking her, swooped down to get her, and she would’t even see or hear it coming. She’s a scrappy, mean little beast when she wants to be, so I believe she could have fought off an owl, but she’s also small and would have had to fight hard. The owl could have carried her quite a distance too, so even if she managed to get away would she even know how to get back? The one, last little shred of hope we have is that she’s microchipped, but that would require that someone see and capture her (difficult), and take her to a vet or shelter. It’s a longshot bet.

We left the park with heavy hearts.

With each hour that Bianca didn’t return that place got more unbearable. We needed to escape our own grief even though we knew leaving the park wouldn’t solve that. While we are coming to grips with losing Bianca, we are still hopeful she’ll turn up. We keep hearing stories about people who’s cats returned weeks or even months later. Cats who covered quite a distance, as much as eight miles and then returned home. We have tried everything we know to keep the search going, posting on Facebook Thousand Trails pages and groups, Craigslist ads, and calling local shelters. Even now, people continue to call, text, and send photos and videos hoping to re-unite us with Bianca.

With every call there is hope, but the hope fades a little when none of those cats is Bianca. I think it’s almost as hard on those folks as it is for us. With so many eyes keeping watch for our spunky little cat, if she’s around it seems someone will see her. If we are not reunited with her however, the one image I return to for comfort is that she’s really enjoying herself in the woods, running free, smelling grass, and chasing the butterflies to her heart’s content.

If you should have the unfortunate experience of losing a pet, here are some of the resources we used:

Even though Bianca has yet to be located, these resources have proved very helpful. The people on these sites understand the heartache of losing a pet, and work hard on your behalf to bring them back.