Did the Solar Eclipse Live Up To The Hype? 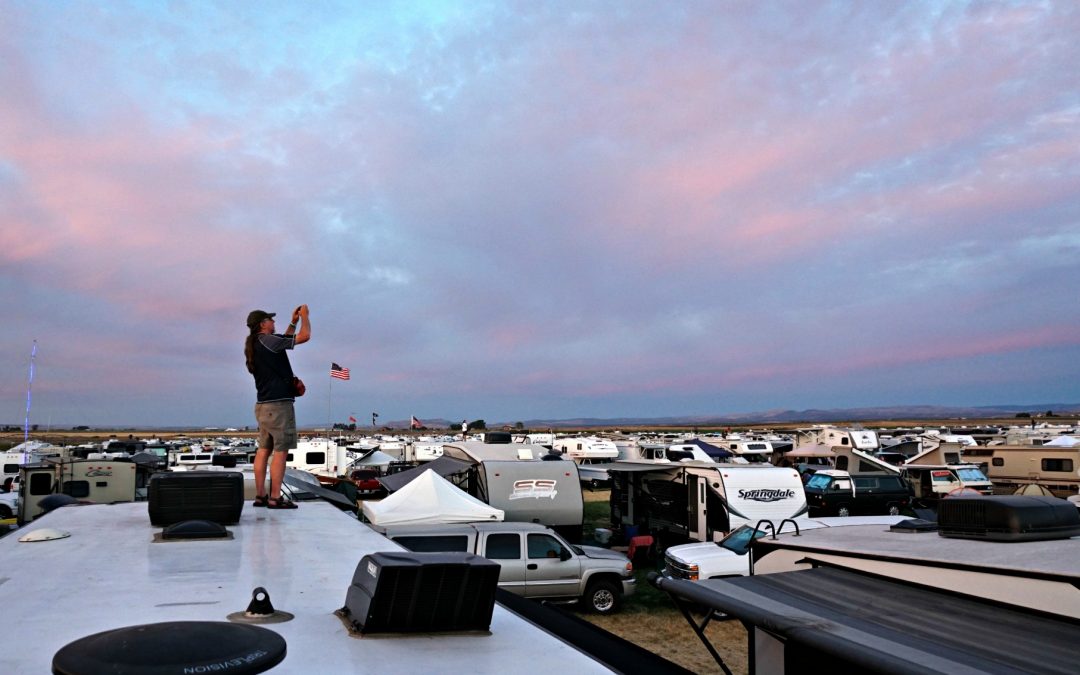 There was a lot of buzz about the solar eclipse and depending on who you ask, it was either an amazing total eclipse or a complete total dud. The difference was where you were at the time.

We Changed Plans To Be In The Path Of Totality

Bryce and I had anticipated being on the east coast in the summer of 2017. Bryce had visions of Boston for the 4th of July, then meandering up the coast to see the Fall colors. When we heard that Xscapers would host a Solar Eclipse Convergence in Oregon, we dropped our plans like a tree drops old dried leaves!

There hadn’t been a total solar eclipse in the contiguous US since 1979. Knowing that one would happen in 2017 and that we had the flexibility to see it, was too extraordinary to pass up.

That is the beauty of living a location independent lifestyle. We have the freedom to choose where to go and when.

The Xscapers Convergence was reason enough to head to Madras, Oregon. If you are unfamiliar with the Xscapers RV club, a subgroup of Escapees, you can check out a post I wrote here. Madras was on the path of totality and a perfect setting for thousands of people to flock to observe the eclipse. Farmers opened up their big, open fields to accommodate the nearly 25,000 people who descended on SolarTown. 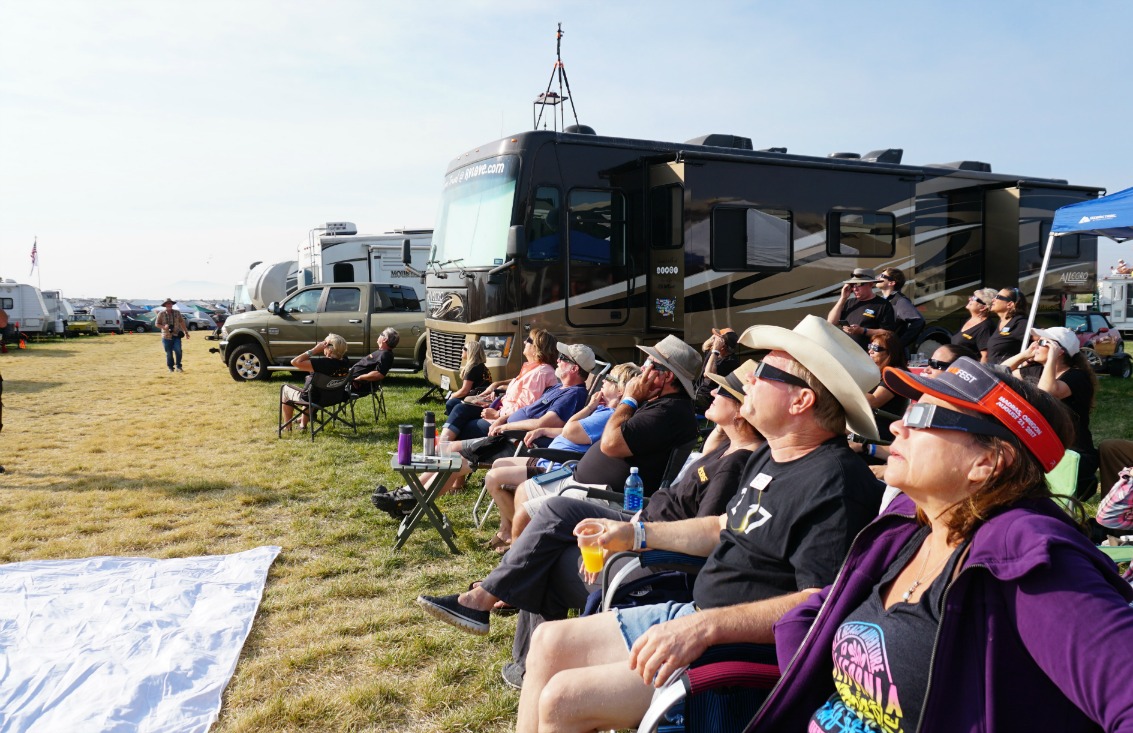 We knew many people from a prior convergence, and made new friends too. There were potlucks, beer tastings, a disgusting jelly bean tasting game, and even education about the solar eclipse.

I highly recommend that you observe the Solar Eclipse with others. A unique experience is even sweeter when you share it with friends. Plus the anticipation of the eclipse built up over the days.

Eclipse day was like Christmas morning. People awoke early and planted themselves in chairs with hot coffee or mimosas. The air was cool and conversations hot with excitement. People gathered in large and small clusters. We chose to hang on top of our rig to get better views of the mountains. 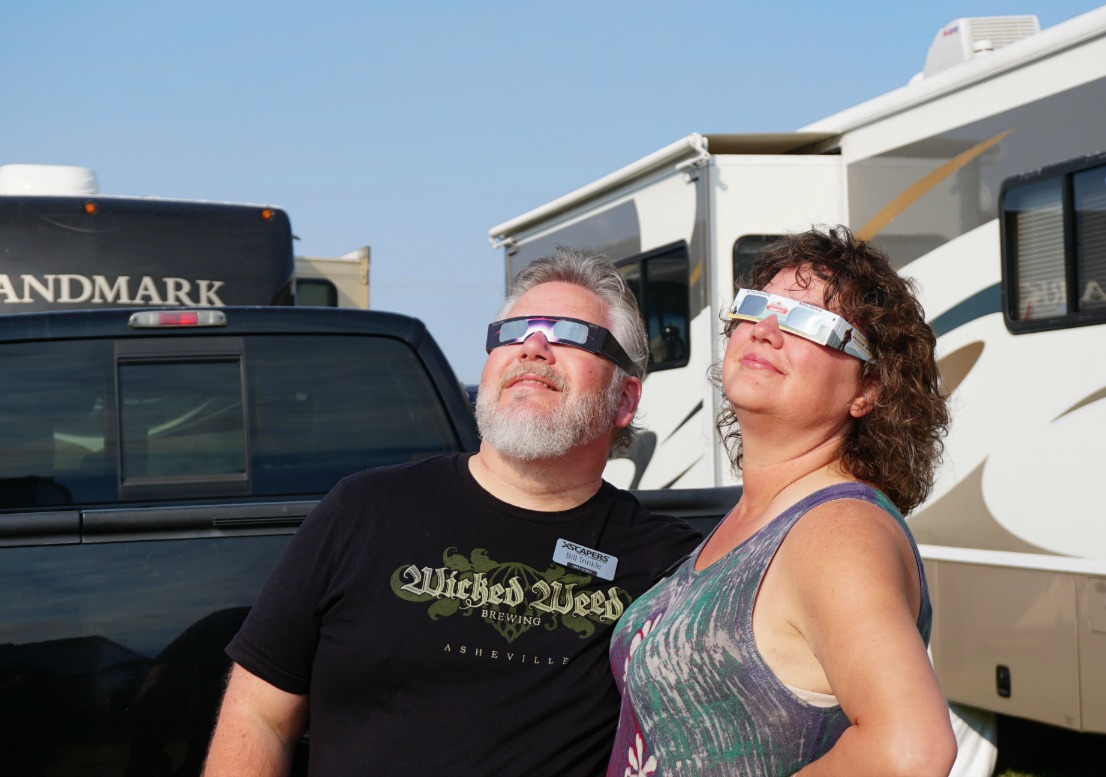 Tunes flowed all around us. Playlists included Dark Side of the Moon, Total Eclipse of the Heart, and Black Hole Sun. “Giddy” is how I would describe the collective mood in that massive field.

First contact between the moon and sun was at 9:06 AM PST. Special solar eclipse glasses went on, and we all stared at the sun, mesmerized like it was an alien encounter. A little black sliver hung over the sun for over an hour. It wasn’t particularly exciting, but there was somethings peaceful about thousands of people staring into the sun, waiting for magic.

We were suspended in this time and space; no talk of politics or religion, no arguing about opinions, and no fears about the future, or regrets about the past. Only quiet anticipation.

Then a Total Solar Eclipse

Then it happened. About two minutes before a total eclipse, the temperature dropped about 20 degrees, everything became still and the hush of people started to erupt into chatter as the moon moved into the sun’s center.

As everything went dark, cheers erupted…

Check out the 1 minute and 15 second video here. Click on video.

It was one of the most magical experiences any of us had ever had. Experiencing it together created a bond that will last a lifetime. Those two minutes and two seconds of the total eclipse was quite spectacular. The few seconds after that were equally awesome for different reasons.

As the moon slowly moved off the sun, the light came blazing back, and the air warmed up significantly. But the most breathtaking moment was the 360 degree sunrise that simultaneously illuminated the mountains, plains, and horizon. Golden rays beamed everywhere like a scene from Close Encounters of the Third Kind.

I’ll remember that moment for the rest of my life. It helps that many of my RV peers, like William Trinkle, took great photos and video to capture the moment.

If You Weren’t In The Path of Totality, None Of This Happened.

Here’s the rub about this Solar Eclipse thing. If you weren’t in the path of totality, then none of this happened. It was likely an ordinary day, and even with the solar eclipse glasses, you only saw a partial eclipse. You probably didn’t get to experience the weather changing or the stillness of the air. Maybe it was “kinda cool” as my friend Julie said, but it was not a life changing experience. 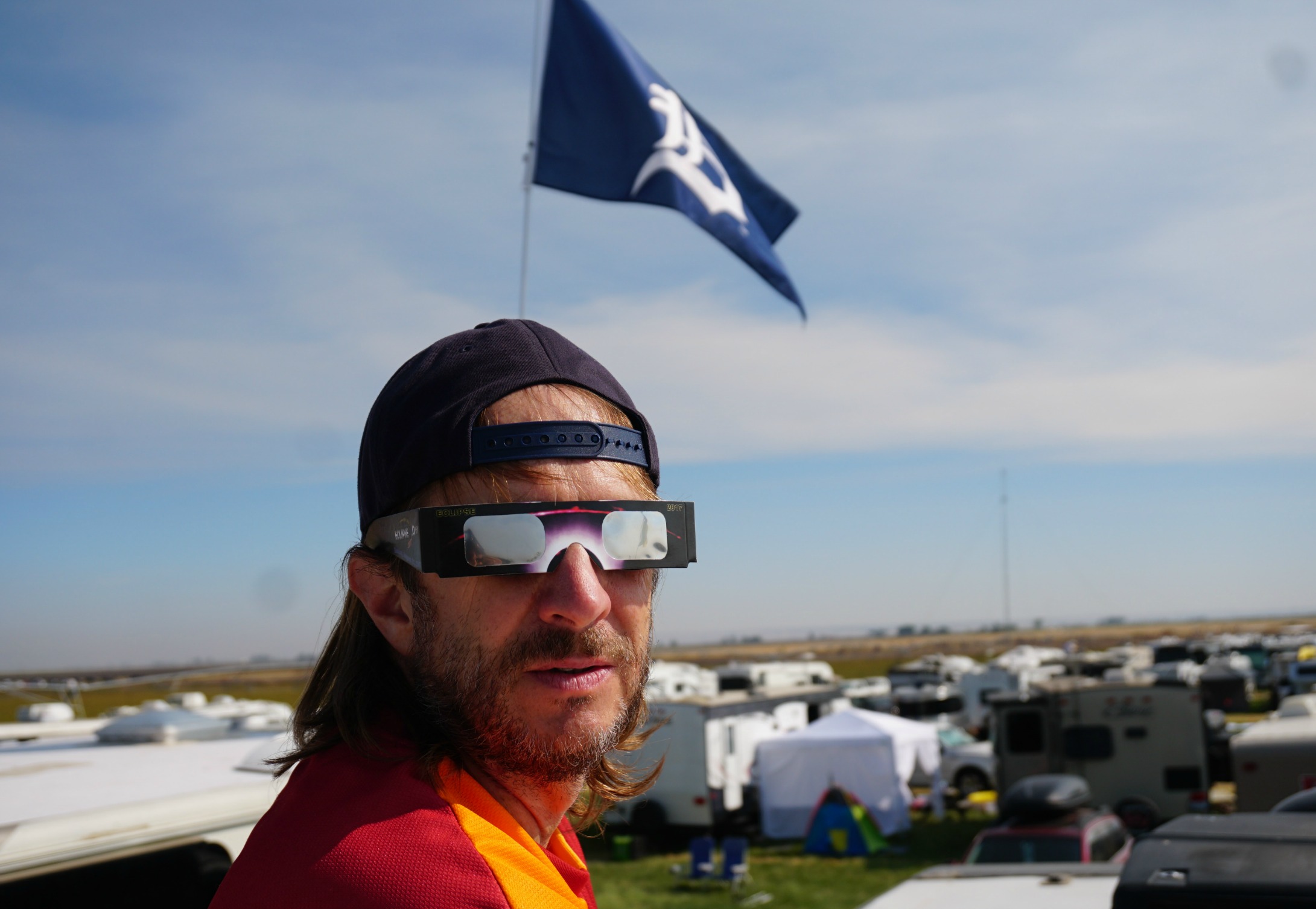 That’s the difference between being in the path of totality of a solar eclipse verses anywhere else. It’s either a life changing experience or an ordinary day. So I encourage you to plan for the next one, where ever it may be.

The next US solar eclipse isn’t until 2024. You’ve got time to plan, but be sure to block your calendar! For more Solar Eclipse information check out this site.