Custer and the Little Bighorn Battlefield, A Lifelong Dream – Part I 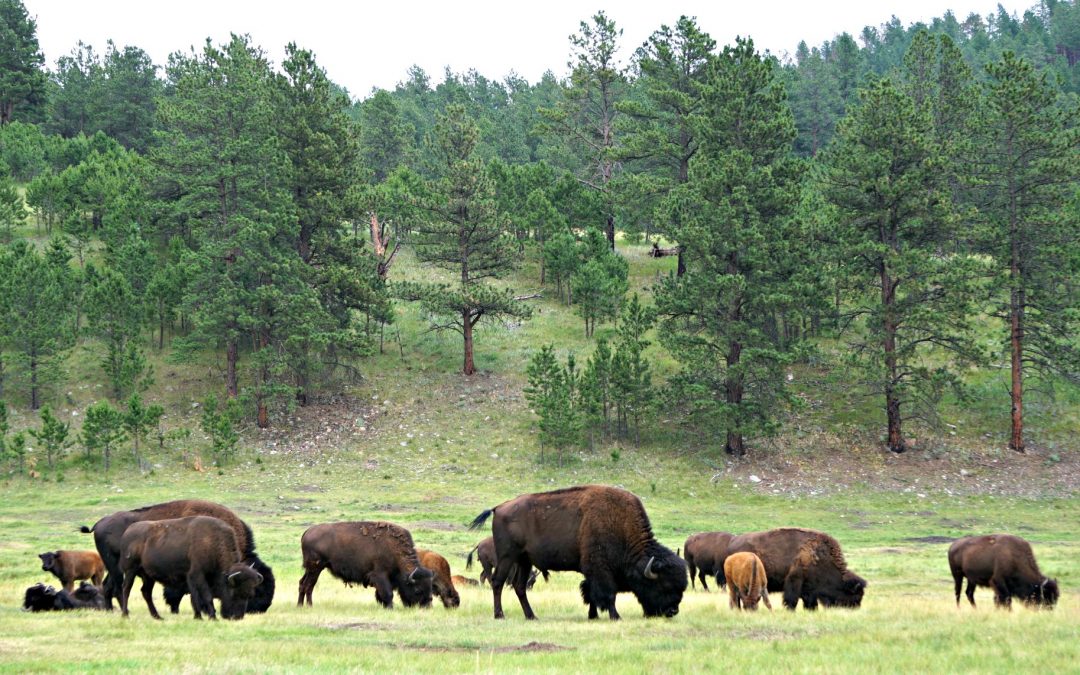 George Armstrong Custer. The Battle of the Little Bighorn. Crazy Horse. The Seventh Cavalry. Custer’s Last Stand. Sitting Bull. What is it about these words that has created a mythology all its own?

A trip to Little Bighorn has always been on my ultimate bucket list. I became curious about this tale upon learning of it back in grade school, reading about it in encyclopedias, and studying it in my high school American History class. I made a pact with myself as a young adult to make the trip.

Over the next couple of decades, it continually eluded me. A two-week trip to Glacier and Yellowstone National Parks in 1996 put me in the neighborhood, but Montana is a large state (4th largest). This mysterious little place out in southeastern Montana I often studied on maps remained out of reach. Is it high plains country? Is it Rocky Mountain country? Is the Little Bighorn River little? Or big? These were burning questions, and yet I had no answers.

It nagged at me. Who plans a trip to one of the least populous places in the country as the main event? Could it be bundled with other nearby places? Maybe the Black Hills of South Dakota were a worthy travel companion.

It wasn’t until my wife, Camille, and I decided to travel full-time in an RV in 2016 that my chances of finally making it to this near mythical place dramatically improved. 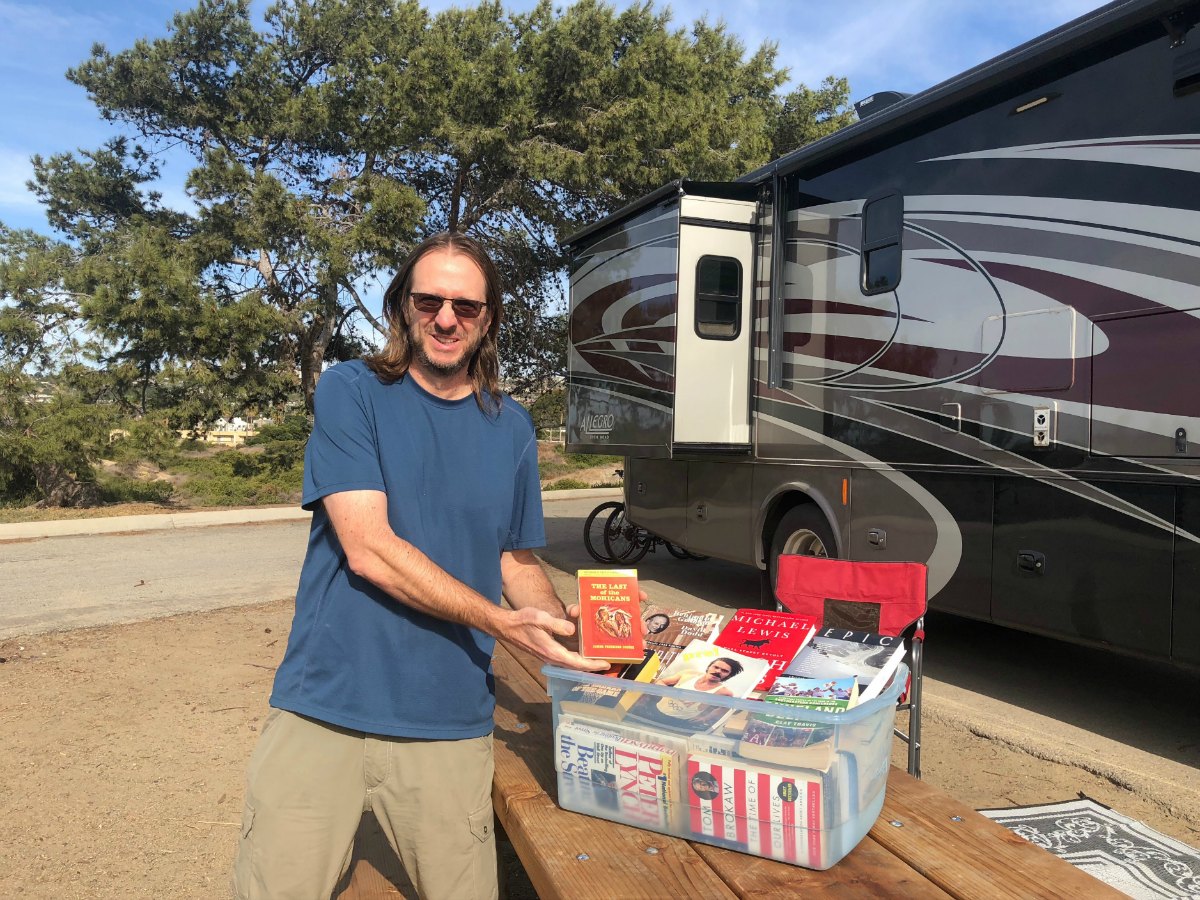 Two short weeks into our journey, the first lightning bolt of inspiration struck. We were in a thrift store in the community of Harbor on Oregon’s southwest coast.

Camille and I both love a good thrift store and antique mall. I usually head straight towards the collectibles and books. I have a terrible habit of buying more books than I can possibly read.

When we moved out of our house, I was forced to donate hundreds of books, box up many more for safekeeping at our storage unit, and bring only my 25 most-prized tomes on the road. And then I continued buying more as soon as we started our travels. Yes, my wife tells me all too often about my problem. 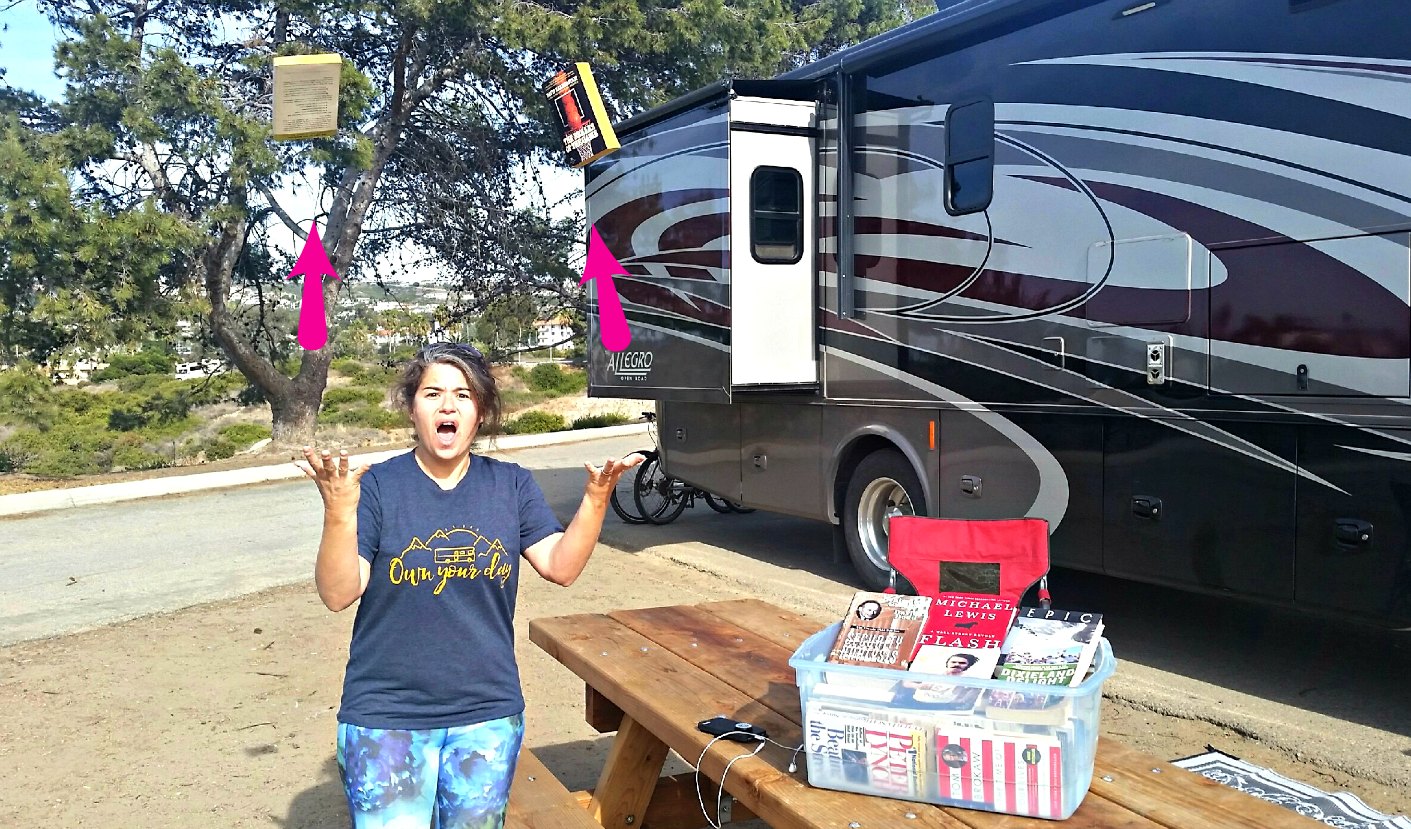 There it was on the dusty shelves of a nearly forgotten thrift store in an out-of-the-way, small town! Like the nearby lighthouse beacon, it guided me in.

A Terrible Glory: Custer and the Little Bighorn – the Last Great Battle of the American West

by James Donovan. Available on Amazon.

At 500 pages of dense historical reading, it’s one of the most definitive works on George Armstrong Custer and the Battle of the Little Bighorn. It has 92 pages of footnotes alone. I could not control my giddiness. Its $1 purchase (no sales tax in Oregon) was a no-brainer.

Then, the surprising (to me) and not so surprising (to my wife) happened. The book sat tucked away in my overhead bedroom cabinet for over six months along with nearly 20 other treasured works I’ve already acquired along the way.

The Great American Solar Eclipse changed everything. Newfound friends were making plans to gather in Oregon for the eclipse in August. We were planning to be in New England for the summer, but quickly realized Cape Cod would have to wait for another year (the next total solar eclipse in the U.S. is not until 2024).

While dining on a plate of deliciously messy ribs at a joint in Austin, Texas, we cemented our plans for a western summer swing. The travel pieces started falling into place. After making it as far east as Asheville, North Carolina in April, we would meander north and west over the next four months, including a July visit to the Little Bighorn.

Then it happened–I finally picked up Custer in June. While in Minneapolis, Minnesota, Camille traveled home for a week to visit family. Alone, my reading quickly gained momentum and I was hooked.

It’s a fascinating, comprehensive read that begins way back with England’s successful colony at Jamestown, Virginia in 1607. It traces those early European settler interactions with Native Americans all the way through to (and beyond) the U.S. government’s engagement in the Great Sioux War of 1876.

While the book’s primary focus is the Battle of the Little Bighorn, it also provides a rich account of George Custer’s 36 years of life. He was an enormously successful and accomplished military hero at a very young age. Born in Ohio and raised in Michigan, he studied at the United States Military Academy at West Point, New York. Despite finishing last in his class (due to frequent pranks which earned numerous demerits), his graduation was accelerated by a year due to the outbreak of the Civil War in 1861.

Within a month of his graduation, Custer participated in the first significant engagement of the war, the First Battle of Bull Run in Virginia. Two short years later he had risen to the rank of Brigadier General, commanding volunteers in the Union Army. He led a decisive action at the Battle of Gettysburg in 1863, and was instrumental in forcing Confederate General Robert E. Lee’s surrender at Appomattox Court House in Virginia.

Custer’s regiment received the first flag of truce from the Confederate Army and he was actually present at the surrender signing. He was given the farmhouse table on which the surrender papers were signed as a gift recognizing his war contributions.

Custer: a Great Leader or a Flawed Hero?

Custer was regarded as a hero by many. Those who fought under him admired him because he led by example, inspired his troops, and used aggressive tactics. He always led his troops into battle, never commanding from the safety of the rear. Not surprisingly, he had eleven horses shot out from under him during the Civil War, but never suffered a serious wound. He became known in the media as the “Boy General.”

Custer married during the Civil War in 1864 (to Elizabeth “Libbie” Bacon). He was a fastidious groomer; flamboyant dresser; known for his physical strength and endurance; and avoided using foul language common during the war. While officers’ penchant for whiskey was legendary in the post-Civil War Army, Custer was never one to take a drink from the brown jug.

Yet seemingly with every hero figure, there are surprising and unexpected flaws. Custer continuously tested boundaries and pushed limits within the U.S. Army. He was suspended and nearly expelled from the service when he left his remote forward post in Indian Country with a small detachment for an unauthorized trek to visit his wife.

With each success on the battlefield, Custer became more confident–supremely confident by the time he was suppressing Native American independence on the Great Plains.

Not everyone loved Custer, though. He demanded discipline from his troops–perhaps too much. Many thought he was a seeker of glory and fame, often putting his troops at undue risk. He definitely pushed his troops to their limits in the quest to be first to find and attack the large Sioux and Cheyenne encampment at the Little Bighorn. 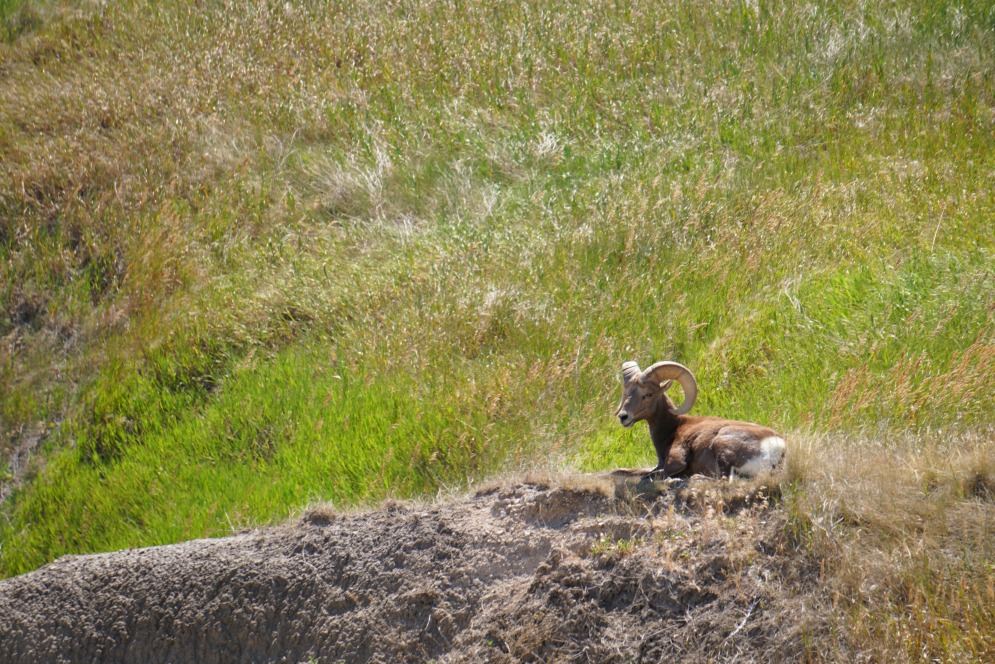 As I learned more and was drawn to Custer’s character, he reminded me of the more modern day American Army hero, Pat Tillman. Driven. Accomplished. Successful. Principled. Unconventional. Tester of limits. Contradictory. Enigmatic.

You might know the Tillman story of leaving behind an improbable, yet highly successful professional football career to enlist in the U.S. Army’s elite Rangers unit following the 9/11 terrorist attacks. After several heroic tours in Iraq and Afghanistan, Tillman, was shockingly killed at the age of 27 in a friendly-fire incident in hostile Taliban territory in Afghanistan in 2004.

I’m drawn to the complexities of these types of flawed heroes. It’s the combination of their principles and bravado that I appreciate.

I grew more excited with each turn of the page, and by the time we reached the Black Hills of South Dakota, I was deep into the read. We were also deep into sacred Lakota Sioux ancestral territory. The area had been treatied to the Lakotas and then taken away by the U.S. government, in part because of an expedition led by Custer to confirm the presence of gold in the Black Hills.

We were now living the book! 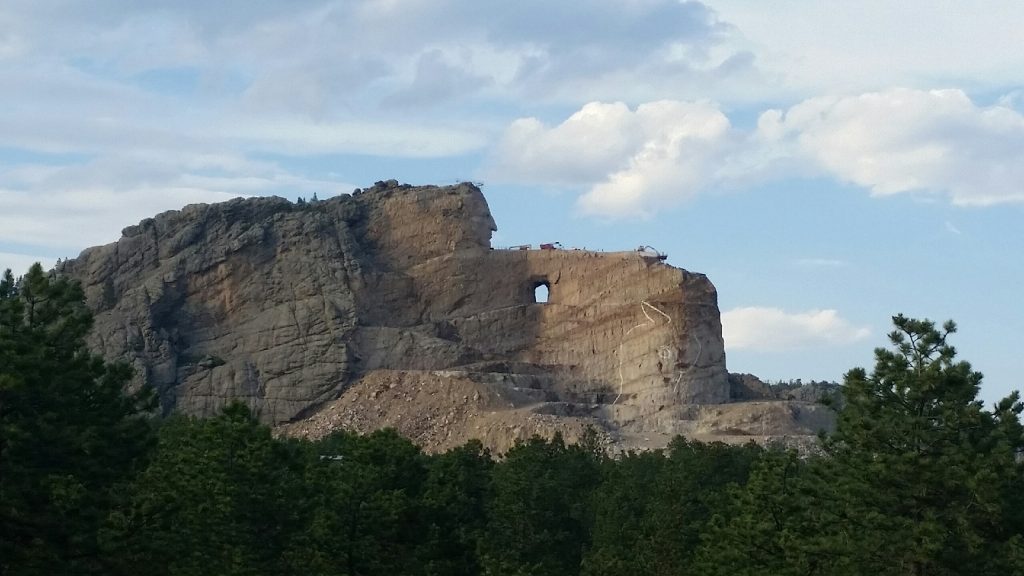 We visited Mount Rushmore, and saw the in-progress Crazy Horse Monument. We also took in one of the most amazing state parks in the country–Custer State Park–with its impressive bison herds, granite pinnacles and sparkling lakes. Our explorations had me feeling like we were on the set of one of my all-time favorite epic films, Dances with Wolves. The more we saw, the more I read.

We landed in Sheridan, Wyoming for the better part of a week. It was torture!

We were within an hour’s drive of a lifelong dream.

Camped just over the state line from Big Sky Country, if I could just get up on high ground I might be able to peer down on the battlefield in the distance.

But there were rodeos to see, places to visit, and work to do–and it gave me the needed time to power through the remainder of the book, finishing literally hours before breaking camp. We were all set for our highly-anticipated three-day visit. 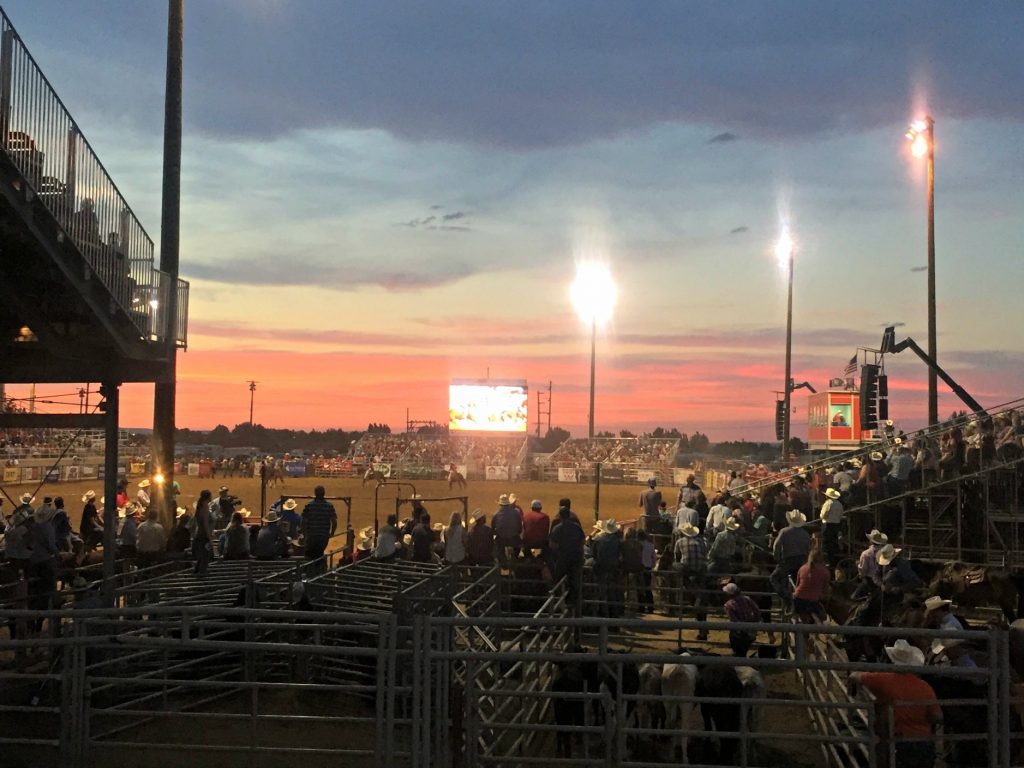 Click here for Part II of Custer and the Little Bighorn Battlefield!