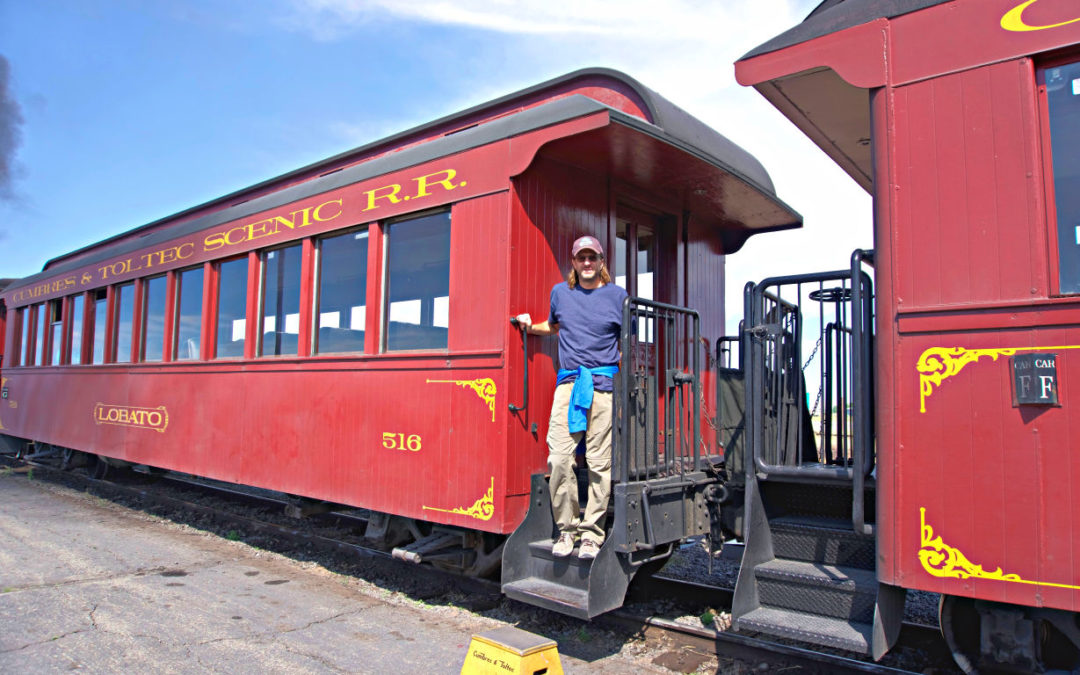 If you’re looking for a unique and memorable experience on your next summer trip to the Rocky Mountain states, we have a trip for you. Take a ride on the Cumbres & Toltec Scenic Railroad (C&TS) for a day you’ll not soon forget. The steam locomotive, narrow-gauge Rocky Mountain railroad covers 64 scenic miles between Antonito, Colorado and Chama, New Mexico.

Colorado’s unmatched scenic beauty brings swarms of visitors in the summer months, and Carlsbad Caverns and Santa Fe are big draws in New Mexico. But you can leave the crowds behind and enjoy the unspoiled, alpine beauty of southern Colorado and northern New Mexico when you spend the day riding the rails.

On a spectacular early summer day, we rode the C&TS from Antonito to Chama (see more route options explained later) on a journey back into time that we hoped would never end.

To read more about our 2018 activities, please see our article Our 2018 RV Life Year in Review.

We boarded the train for our 10 am departure from the tiny high desert outpost of Antonito in the sprawling San Luis Valley. We chugged out of town in restored passenger cars being pulled by a coal-fired steam locomotive from days gone by headed for distant high mountains. 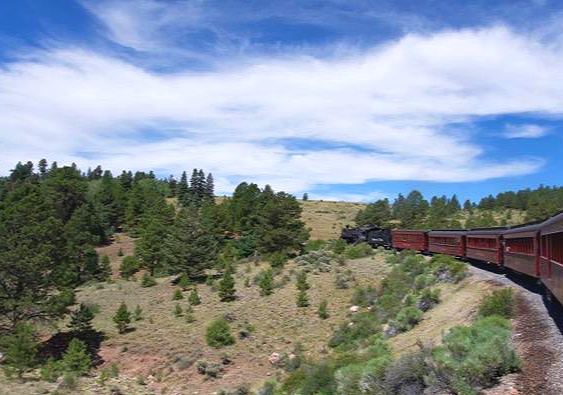 After passing through desert scrub and glimpsing sleek antelope grazing on the land, we were soon wending our way up the lower slopes of the mountains. The railway is an engineering marvel. It had to be built at a moderate grade (no more than 4%) so that the steam locomotives of the time could power the train cars up the mountain and not overload the brakes on the way down.

We were literally looping our way into the mountains at the leisurely speed of 12 miles per hour, providing ample time to view the amazing mountain scenery unfolding around us. Before we knew it, we had passed into New Mexico—the first of 11 state line crossings on our tour.

Originally built in 1880 and operated by the Denver & Rio Grande Western Railroad, the rail line was part of the San Juan Extension built from Alamosa to Silverton, Colorado. It served the booming silver mining industry, as well as the timber and agricultural industries. 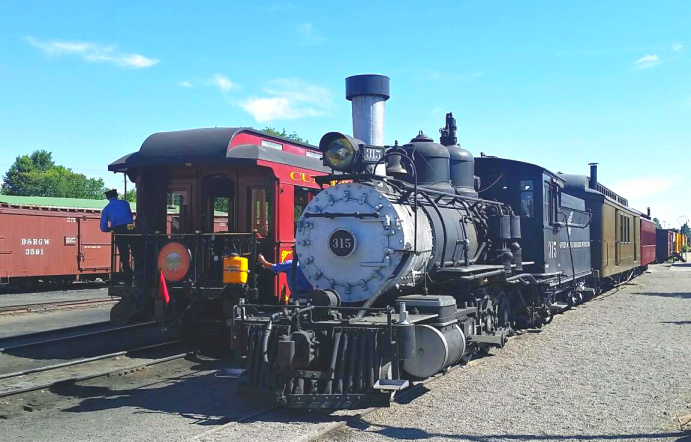 Within 15 years of its building, the silver boom went bust, precipitating a long, slow decline in the San Juan Extension line. A brief post-World War II natural gas boom breathed life back into the railway, but it was short-lived. By the 1960s, commercial traffic was virtually non-existent, and the line was abandoned in 1969 as the last remaining steam engine locomotive service in the United States.

Back on the tour, the train labored up into the pine and spruce forests of Rocky Mountain high country. We hopscotched between Colorado and New Mexico following high above the Rio de los Pinos, a remote river valley with a few unpaved roads, occasionally spotting summer livestock camps below.

As we rode along, we met an elderly couple in their eighties that had just married after each had lost their previous spouses. She was from Denmark and he was from Texas, and we enjoyed hearing their stories. It was heartwarming to see this loving couple having so much fun on their day on the railroad.

After spending an hour or so in our passenger car, I ventured out to the open-air flatbed railcar to get closer to nature and enjoy the warm summer air. We passed through a dramatic stretch—Toltec Gorge—with vertical cliffs, two tunnels, the rock spires of Phantom Curve, and 800 foot drops to the river below.

After traveling through The Gorge, the route spilled out into Colorado’s pristine high country with beautiful meadows, clear-running streams, and mountainsides laced with beautiful stands of aspen trees. Against this backdrop, we pulled into Osier Station—the largest of three original company towns established to serve the rail line.

The train stopped here for a lunch break of about an hour. We ate a buffet lunch offering multiple main dish options, and the food was surprisingly tasty for such a remote place. After lunch, we had time to browse the adjoining gift shop.

Osier is the only settlement still inhabited along the railway. People employed by C&TS live in nearby dormitories during the summer tourist season. I met a family from Iowa that was living and working (workamping) at the Osier Station lunchroom. What a great place to spend the summer! 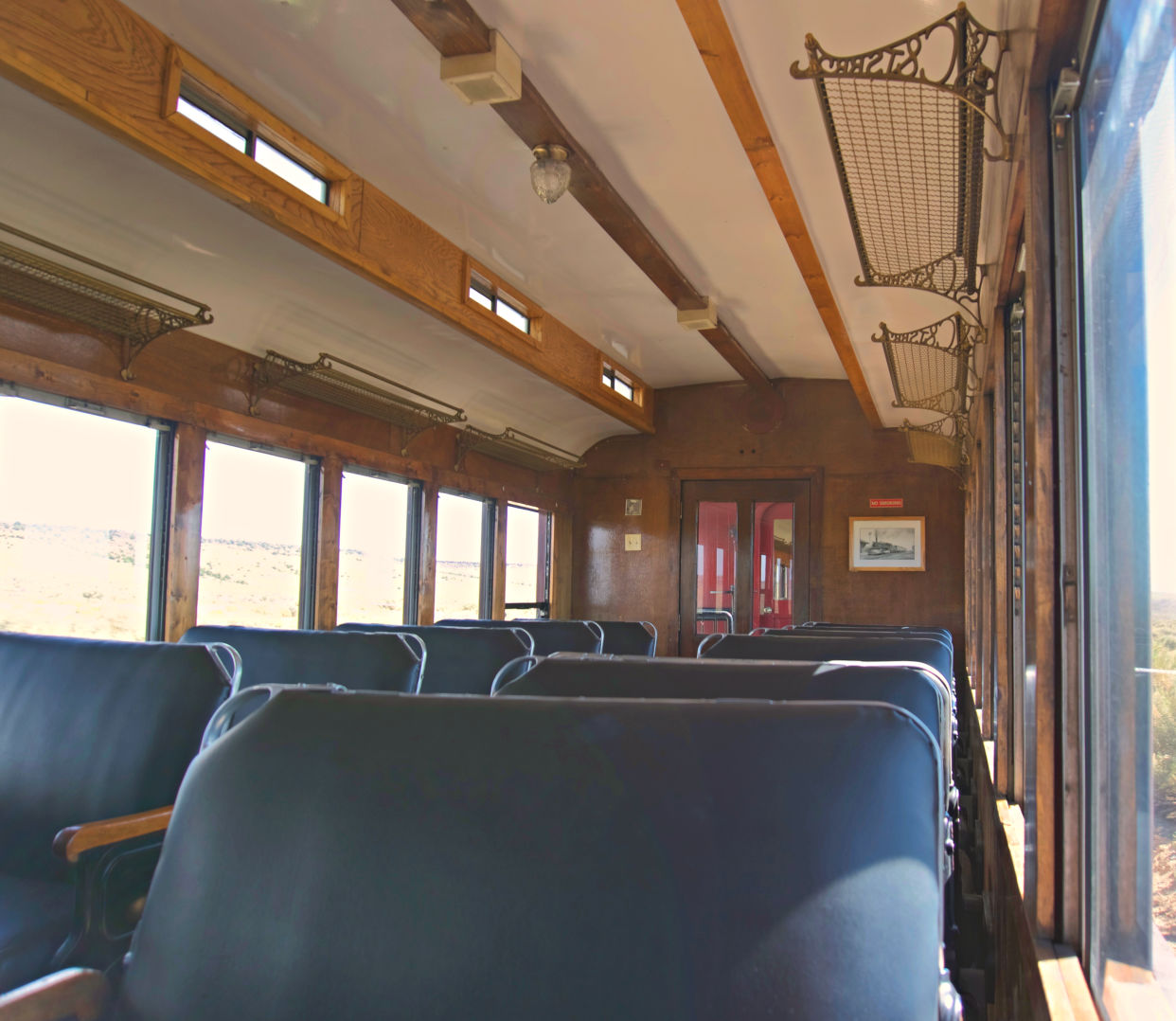 C&TS has a flexible train schedule with nine different options. Trains leave from both ends of the line—Antonito and Chama—and arrive about the same time in Osier for lunch. Most people ride the train in one direction and return via motorcoach, but you can ride round trip by train to Osier and back.

After the rail line was abandoned in 1969, the states of Colorado and New Mexico were encouraged by preservationists and local civic interests to purchase the railroad. The most scenic stretch of the San Juan extension was purchased for just under $550,000 and began operating as the C&TS in 1971. The rest of the rail line to Silverton was dismantled.

The railroad has been designated a National Historic Landmark and listed on the National Register of Historic Places since becoming a scenic railroad. It is supported by a dedicated and hardworking non-profit group—Friends of the Cumbres & Toltec Scenic Railroad—who preserve and interpret the railroad, primarily as guides on the train rides. Our guide was extremely knowledgeable about the railroad’s history and the geography of the route. 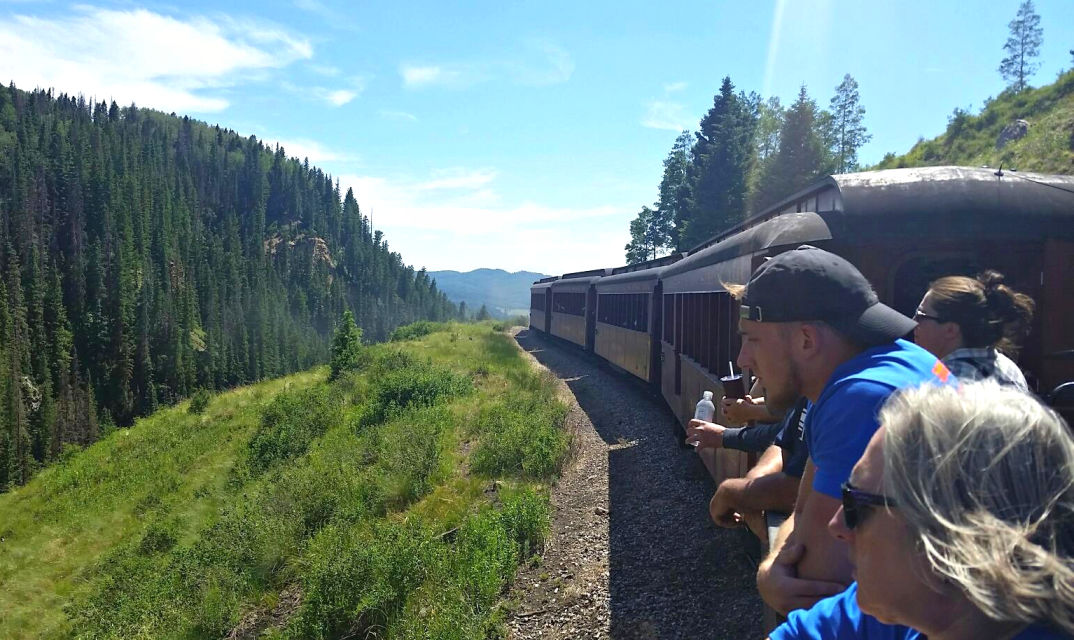 After lunch, I purchased a cold drink from the refreshment car and returned to the viewing car to enjoy the glorious afternoon. With the trusty locomotive belching black smoke into the air, we lurched around Tanglefoot Curve, where the train nearly doubled back on itself as it continued to climb. After rising more than 2,200 vertical feet from Antonito, we reached our high point at Cumbres Pass (10,015 feet above sea level) along the Continental Divide. We stopped briefly at the restored Cumbres Pass section house—one of two abandoned settlements established to maintain the railway and house water reservoirs used for refueling the steam engine locomotives. 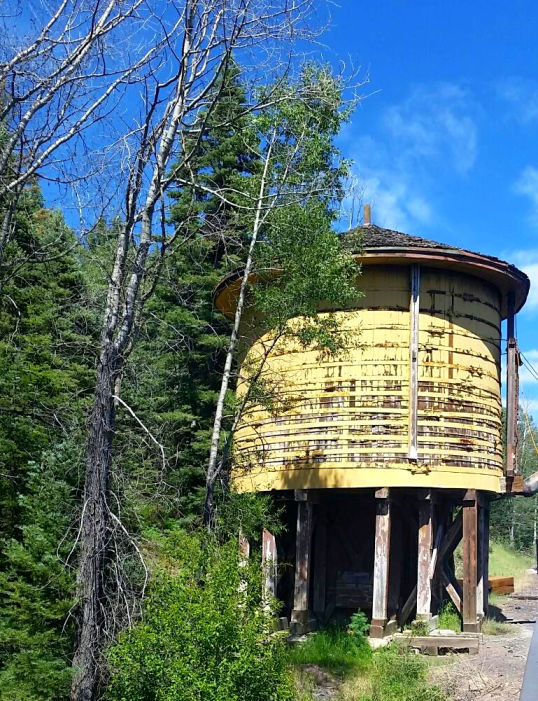 After cresting the pass, we followed a few switchbacks down to a scenic spot with dramatic vistas called Windy Point, where we stopped again. On this day, a large group of family and friends had ridden the train to honor the recently departed spouse of a long-time worker on the C&TS. During a short, but poignant ceremony, they released her ashes to rest alongside her beloved spouse, showing me that C&TS is like a family filled with caring and dedicated individuals.

After the stop, the train began its long, gradual descent down to the end of the line in Chama, a quaint mountain town nearly identical to Antonito in population (1,000) and elevation (7,900 feet). On the descent, we crossed a high trestle over Wolf Creek and passed the historic Lobato sheep ranch.

Train crossing one of many high trestles along route.

As we rolled into Chama to end our rail tour, the afternoon had turned quite warm. But we felt very satisfied and fulfilled after our six-hour experience. I wished we had more time to explore the historic train depot and Chama, but we were whisked away for our motorcoach return.

The motorcoach ride was just as scenic as the railroad. Our driver narrated our return trip as we swept over La Manga Pass and dropped into the sun-dappled Conejos River valley and its campgrounds and lodges.

For those wanting to ride the train during their RV vacation, the Rio Chama RV Park is a great spot along the river in Chama. We stayed at the Alamosa KOA—about a half hour’s drive from Antonito.

C&TS operates from roughly Memorial Day to mid-October. Full day tickets are approximately $100 per adult and $50 per child with lunch included. Please check out the C&TS website for more information and to reserve your tickets.

If you enjoy interesting excursions, natural beauty, history, and a family-friendly adventure, you’ll love spending an uncrowded and relaxing day taking a ride on the C&TS. Climb aboard next summer!